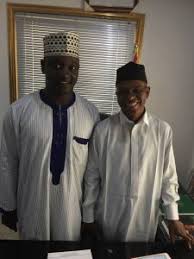 A journalist in Kaduna has cried out after political thugs allegedly working for the state governor Nasiru El-Rufai’s team were ordered by his spokesman Samuel Aruwan to molest him after being expelled from a caucus meeting of the APC at its Kaduna Secretariat yesterday.

The Journalist, a reporter with Desmins Independent Television (DITV), Ibrahim Haruna Nasarawa said he was shocked when he saw thugs deliberating on whether to molest him or not as he walked out of the meeting to the car park.

Haruna, who is also the anchor of a popular Hausa program on DITV/Radio ‘Ga Fili Ga Mai Doki’ said “I thanked God the political loyalist to Hon. rep member representing Igabi Local Government Hon. Mohammad Abubakar Mamadi are the ones that saved me.”

He told newsmen that when the thugs approached him they asked “Are you the one Samuel Aruwan said we should bring you out? I said Yes and they said, honestly we can’t they then took me outside, God helped me they didn’t beat me.” he added.

The journalist said, “I thank God the political loyalist to Hon. Rep member representing Igabi Local Government Hon. Mohammad Abubakar Mamadi were the ones that saved me.”

He added that “If it were someone different they didn’t know the story would have been something else.” Thanking God for his popularity.

The spokesman has declined to respond to calls by journalists wanting to confirm his side of the story on the said order he gave to molest a journalist.

A journalist sent the following text message to him but did not respond “Good evening sir, My name is Israel Bulus’s elanza news. There is an allegation you ordered political thugs yesterday to manhandle DITV Reporter at the APC caucus meeting held at the APC state Secretariat yesterday. How true is the allegation.”