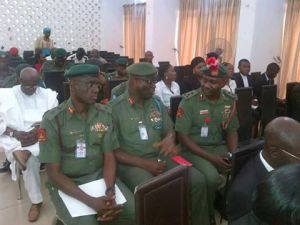 The Nigerian Army and the Chief of Army Staff have failed to appear in court for hearing in separate cases filed against them by Sheikh Ibraheem Zakzaky and his wife Zeenat Ibraheem seeking N2b each as damages for the violation of their fundamental rights during the 12th to 14th December, 2015 clampdown on the Islamic Movement in Nigeria.

The court was informed that the Army and the COAS were served the hearing notice on the 10th of May 2016 to which none of the two parties had responded.

The judge instructed that the Army and the COAS be served another hearing notice for the hearing coming up on a new date, 7th of June 2016 insisting on the urgency in the case being a case that borders on fundamental human rights.

The Counsel representing Sheikh Ibraheem Zakzaky, Maxwel Kyom moved a motion seeking the court to fix another hearing date to allow for respondents in the case to hand over their counter affidavits which the judge conceded to in the case of Sheeikh Zakzaky but disagreed to continue the hearing as he demanded in the case of Zeenat Ibraheem.

Justice Shuaibu accepted the demand by the Counsel representing the Attorney General of the Federation, Enoch Simon seeking a further time to prepare his counter affidavit explaining that there is need for that being a case bordering on human rights.

The Counsel to the Attorney General of Kaduna state, Bayero Dari accepted the court’s decision on the matter in which his client is involved.