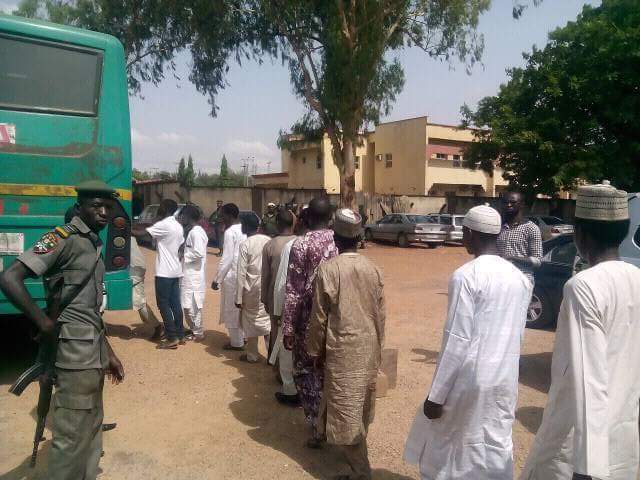 The case filed before Justice Hajaratu Gwada at the High Court Kaduna by the Kaduna state government against Mahdi Munkaila and 90 other Members of the Islamic Movement in Nigeria has today been further adjourned to 1st of June 2016.

The case with charge number KDH/KAD/40C/2016 is accusing the arraigned members of the IMN with criminal conspiracy, culpable homicide, unlawful assembly, disturbance of public peace and wrongful restraint.

The judge adjourned the case to allow each of the accused persons to be served individual charges being a criminal case instead of the collective charge filed by the state government against all the accused.

Counsel to the defendants, Barrister Festus Okoye drew the attention of the court to the fact that his clients were not served individual charges for the case against them being a criminal charge to commence.

On the other hand the counsel to the state government Barrister Bayero argued that the accused persons have been served a collective charge in prison.

The court also instructed that the six accused persons out of the 91 that were absent from today’s proceedings be served their charges as well including those released on bail and the minors.

Barrister Okoye told the court that among those absent from court today was an in-existing person mentioned in the list of those being accused of the crime by the state government, a seriously ill person and some minors.

The court further instructed the counsel to the state government to ensure that they also serve the sureties of those released on bail so that they all appear before the court on the given date for hearing in the case to commence.

Also in addition to the recently adjourned case, there is also another case, the state versus Muhammad Bedde and 30 others coming up before Justice Hannatu Balogun.

Meanwhile, on Monday next week all women and children released on bail are going to be arraigned before court for the same charges punishable by death.